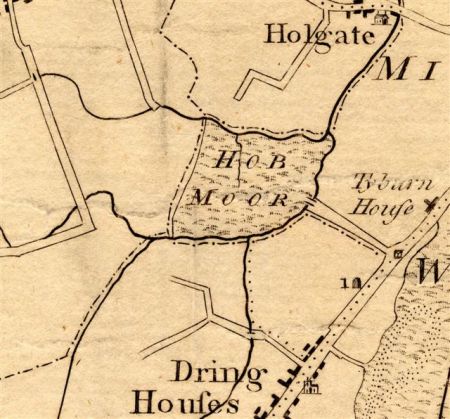 Hob Moor is part of a large, flat area drained by a network of becks and ditches, parts of which are now culverted underground. Streams run on 3 sides of the main part of the moor as can be seen from Francis White’s map of 1785.

The present-day drainage of Hob Moor looks straightforward: Moor Drain joins Chaloners Whin Drain which flows from Askham Bog through Dringhouses; by the Holly Bank access, this stream is joined by Holgate Beck and the water continues northwards to the Ouse at Acomb Landing. However, all is not as it seems! This is how the drainage developed, but it underwent massive changes in 1968 and 1982. 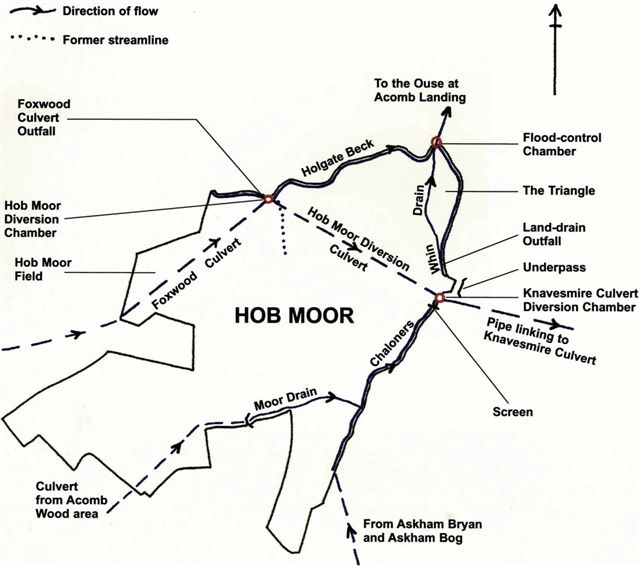 A short distance to the south of the railway tunnel, the water from Chaloners Whin Drain goes through a screen, to catch debris, and then down into a large chamber where it is diverted east into a culvert which runs under the Knavesmire and then enters the Ouse between the crematorium and Bishopthorpe Palace. This diversion was created by the City Council in 1968 to lessen the amount of water flowing north towards Acomb Landing. It does allow for a small flow to continue northwards, ensuring that the beck between the subway and the Holly Bank access does not become stagnant.

A second scheme, the Holgate Beck Flood Alleviation Scheme, was implemented in 1982 by the Marston Moor Internal Drainage Board. This was designed to minimise the risk of local flooding during periods of high water levels in the River Ouse and Holgate Beck. The scheme also reduces the rate of flow in Holgate Beck which at times had been flowing fast and at depths of at least 1.2m; this was dangerous and caused bank erosion. Works were carried out on Holgate Beck to create the Hob Moor Diversion Culvert underneath Hob Moor so that high water levels flowing in the Foxwood Culvert are now diverted under the moor to the chamber by the tunnel and ultimately into the Knavesmire Culvert.

The other element of the scheme was the installation of a flood control chamber on Holgate Beck in the very north-east corner of Hob Moor. The chamber contains a double-height weir which, when raised, blocks the flow north to the Ouse and diverts it southwards along Chaloners Whin Drain; the flow along the Drain then is temporarily reversed as far as the Knavesmire Culvert Diversion Chamber by the tunnel. This was done in November 2000, when a flood period coincided with a period of heavy rainfall in the Holgate Beck catchment area. It is also done when work is being carried out downstream of Hob Moor. The disadvantage of the raising of the level of the weir is that the water-level in Holgate Beck along the northern boundary is also raised; the banks can become saturated and then there may be slippage, as happened in November 2000. Remedial work was then required to stabilise the banks and to ensure the free flow of water.

There is also a land drain system under Hob Moor; it outfalls into Chaloners Whin Drain, halfway up the bank, a short distance north of the subway.

In times of heavy rain and especially following high winds, the Drainage Board monitors the state of the becks around Hob Moor, and they carry out annual bank mowing and dredging of the becks in order to ensure unimpeded flow of the water. Their maintenance of the watercourses by mechanical means is the modern equivalent of work which has been carried out by hand for centuries to combat silting up and bank slippage.

How were streams cleared in the past?

A document of 1639 gives details of “paines” or fines imposed upon the villagers of Dringhouses and there is frequent mention of scouring the water courses and “gripping” the land ie putting in small ditches. In 1659, Thomas Smyth, William Forbut, Robert Dorkwray, George Allen, Elizabeth Hood and Mr Henry Breary were all fined for “not scouring waterway“. There is a record for the Manor of Dringhouses in May 1829 concerning work to be done by the Pasture Masters of Micklegate Ward “their Ditch adjoining the North Lane be sufficiently scoured and cleansed; That the whole of their Ditches between North Lane and the Bottom of Cherry Garth be sufficiently deepened scoured cleansed and widened – and that their watercourse leading from Mr Dalby’s Brick Yard to Acomb Watercourse be also sufficiently deepened scoured cleansed and widened.” (At the time, the area now known as The Triangle was called Cherry Garth.)

In the 20th century, work continued to be done by hand. The Minutes of the Parks Committee for September 1922 refer to recent heavy rains having caused the sides of the beck on a portion of Hob Moor to fall away; the Head Gardener was to do the necessary work. In 1945-6 lengths of the becks were deepened by groups of Italian prisoners of war. Since the early 1960s, the becks have been maintained by machine. 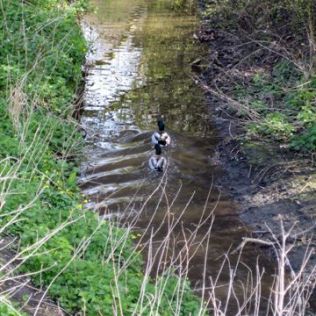 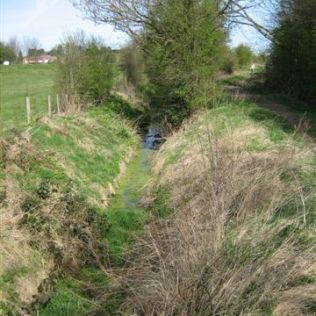 Duckweed on the slow-running Whin Drain

Aquatic plants found in the becks include common duckweed, fool’s watercress and water-starwort. Marginal plants between the underbridge and the Holly Bank access include yellow iris, figwort, celery-leaved crowfoot and lesser celandine, and abundant meadowsweet grows on the banks. The flora alongside North Lane Pasture is a mixture of woodland, streamside and grassland species, for example, male fern, pendulous sedge, wood false-brome, enchanter’s nightshade and greater burnet saxifrage. Three-spined stickleback are the only fish present in Holgate Beck, but kingfisher are sometimes seen flying along the becks. Mallard ducks arrive each spring to breed. In 2009 there were 5 males but no females! On the whole, the wildlife interest of the becks around Hob Moor is somewhat limited: there is scope for enhancement of this habitat.